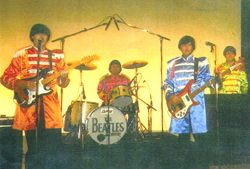 This is a show that rekindles the memories of the most influential force in modern popular music.
Named after the final album the FAB FOUR recorded together, Abbey Road perform for you a 3 part (3*50 minute) live show, with costume changes, that is nothing but Beatles all night long!
The first part takes you back to the “Cavern Club” days in Liverpool; black suits and ties, with white shirts and ‘mop tops’, singing classic songs from the first 3 albums;
‘Please Please me’, ‘With the Beatles’, and ‘A Hard Days Night’
The second part introduces their early musical exploration era: black polo neck jerseys with acoustic guitars and keyboards, showing their great variety of musical styles, taken from the next four albums;
‘Beatles for Sale’, ‘Help’, ‘Rubber Soul’ and ‘Revolver’.
At last it’s time to don the Sgt Pepper costumes for a finale that is all colour and splendour; featuring a musical selection from;’Sgt Pepper’s Lonely Hearts Club Band’, ‘The White Album’, ‘Abbey Road’ and ‘Let it Be’.